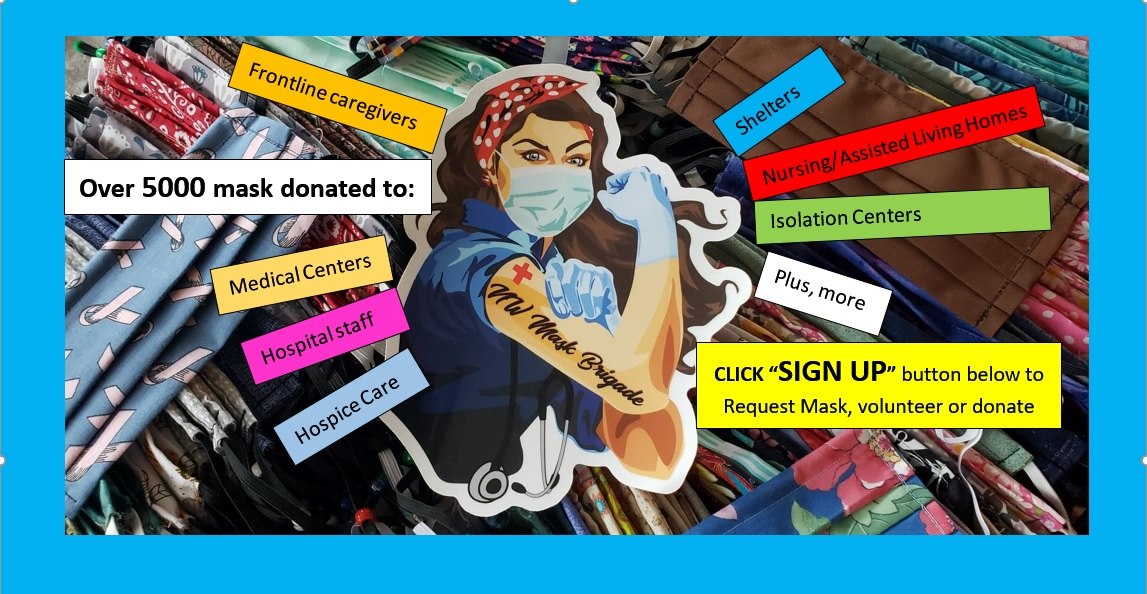 Mask brigades have sprung up across the country and around the world in response to the PPE (Personal Protective Equipment) shortage. The Seattle Mask Brigade was among the first to form in mid-March, and since then countless others have formed, many of which operate on a similar model. The collaborative nature of the brigades allows for resource and information-sharing that makes it easier for anyone who is interested in starting their own local effort. Most brigades have begun by people who recognize need in their community and decide to do something about it. Lee Harper, who started the Seattle Mask Brigade with some friends, described how a small beginning grew into something much bigger. “It’s overwhelming,” she said. “This is like six women who say, ‘OK we want to do something.’ I don’t think we thought it’d be this. It’s like people feel like they have to do something, and they said – “Let’s try this.”

Efforts to distribute PPE in communities across the US

Mask brigades are generally operating on a model where volunteer drivers pick up donated PPE directly from the homes of people willing to donate supplies. Drivers then drop off these supplies at designated recipient organizations – mostly local hospitals, clinics, and other medical organizations. This model allows anyone to become involved in some step of the process. According to Dennis Delie, who helped launch the Union Mask Brigade in Wisconsin, “When it comes to helping keep our fellow workers and those around them safe and healthy, there’s a role for everyone.” All brigades are volunteer-run. Many are organized by community members while others are led by local interest groups such as the Chicago Brigade, which is led by a group of medical students. Brigades have most often been created in larger metropolitan areas, and most confine donations to certain geographic limits to ensure that volunteer drivers are able to complete pick-ups.

Many brigades include specific information about where donations will go. For example, the Pittsburgh brigade includes a map that displays 132 locations where donations are received, as well as constantly updated lists of items pledged for donations and items currently needed by recipient organizations.

However, brigades may be less specific about where donations will go, and several have partnered strictly with medical facilities whereas others have donated more to essential workers in sectors other than healthcare. For example, the Seattle Mask Brigade donates to a range of health and social service organizations, including hospitals, senior living communities, physicians, shelters, and meal programs, while other mask brigades such as the Los Angeles and Orange County brigade deliver strictly to hospitals and health facilities.

The scale of these brigades also ranges. While most receive thousands of mask donations that are distributed across cities and counties, some are extremely small-scale efforts. In St. Paul, Minnesota, for example, there is one brigade that consists of a single google form urging community members to donate to one specific hospital medical team that works directly with Coronavirus patients.

Brigades have varying requirements as to the types of donations that they accept. Some areas, such as Seattle, are less specific and accept gloves, gowns, and most kinds of masks (N-95, fabric, face shields, and even handmade masks). However, in Philadelphia for example only N-95 masks are accepted. Brigades generally do not check on the quality or condition of the supplies they gather for donations, but simply ask volunteers to ensure that their donations are unused. Some also ask donors to check for expiration dates. Because hospitals and other recipients have different requirements for accepting opened packages, sometimes only sealed donations are accepted. Others, on the other hand, accept any unused donations, including opened packages.

Only a few brigades accept monetary donations due to challenges that have arisen in acquiring PPE through traditional supply chains.

Some brigades offer alternative ways to donate in addition to having donations picked up on volunteers’ doorsteps. For example, the LA and OC mask brigade have partnered with two local businesses which act as secure drop-off locations from which PPE will be delivered to health care locations. This increases efficiency, as supplies accumulate in two locations to decrease time and gas money for volunteer drivers. However, for those unable to drop off their donations to the designated businesses, the home pick-up option is still welcomed.

Although it is impressive how quickly volunteers have organized to coordinate PPE donations, there is still a great unmet need across the country. The fact that brigades have been formed primarily in urban areas leaves many U.S. states and the vast majority of the country without such an alternative method for distribution. In these places, there may be workers who need supplies as well as community members who have a desire to donate but no distribution channel connecting them. Many people may even have small amounts of PPE, purchased and unused over the years, that could be donated to essential workers who need it but no clear way to do so.

Getting masks to workers in Seattle

The Seattle Mask Brigade is a volunteer-run group that began in mid-March as a response to the unmet need for PPE (Personal Protective Equipment) caused by the current COVID-19 pandemic. The ultimate goal is to ensure that essential workers and workplaces receive needed PPE – including face shields, masks, gowns, and gloves – to minimize exposure and stay safe.

The Seattle brigade coordinates volunteers to help with various aspects of the donation process, depending on volunteers’ skills, resources, and preferences. Volunteer tasks include:

Most PPE is donated in small amounts (<30). However, more than 800 individuals have contributed, which has led to over 25 thousand total donations over two months from March to April.

The efforts of the Seattle Mask Brigade represents grassroots efforts to fill gaps created by a public health system that is under-funded and resource-deprived, and that puts unequal strain on smaller health and social service organizations as compared to larger hospitals. Read more about the organization’s efforts here.

Continuing until the gap is filled

A commonly stated goal of these mask brigades is to become obsolete as soon as possible. Although communities have stepped up to try to fill the need caused by insufficient pandemic preparedness coupled with an inadequate government response, these organizations hope that soon the need will be met. On its website the Seattle Mask Brigade says, “hopefully we’ll be out of business soon!” Until that time, volunteers continue to offer their services in many ways–from sewing masks to donating unused supplies, to gathering and distributing PPE donations.

Casey Adams is a graduate student at the University of Washington pursuing degrees in public health (MPH) and social work (MSW). She researches and does advocacy around global health and human rights issues in conjunction with PHM-USA and Health Alliance International. 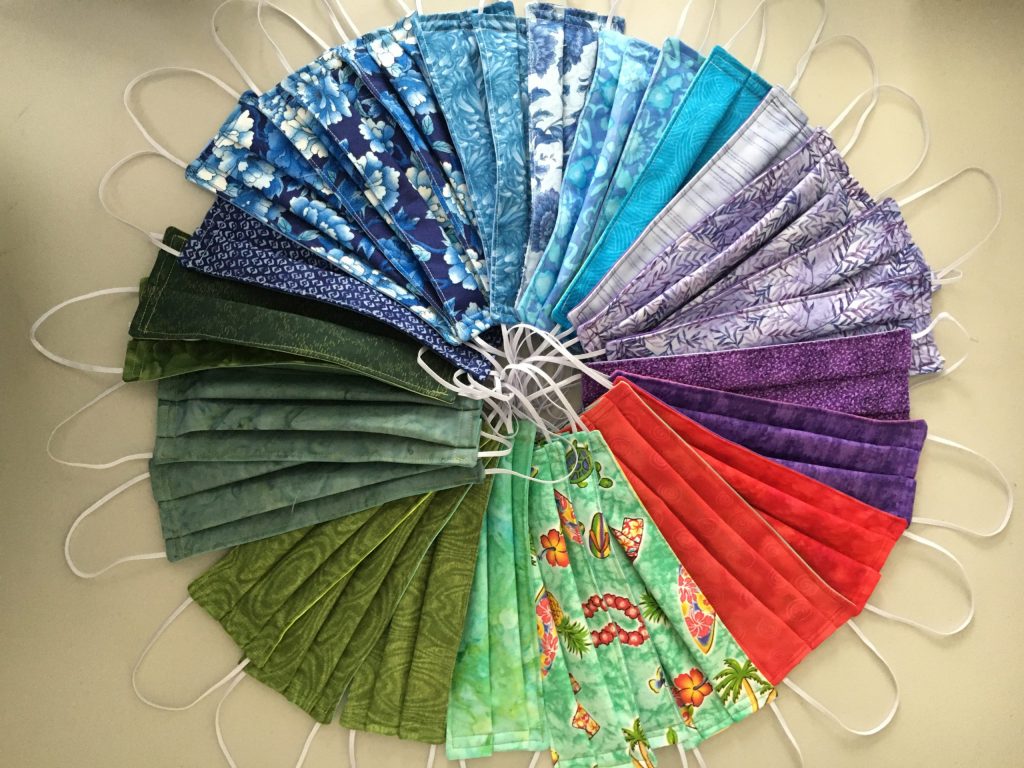