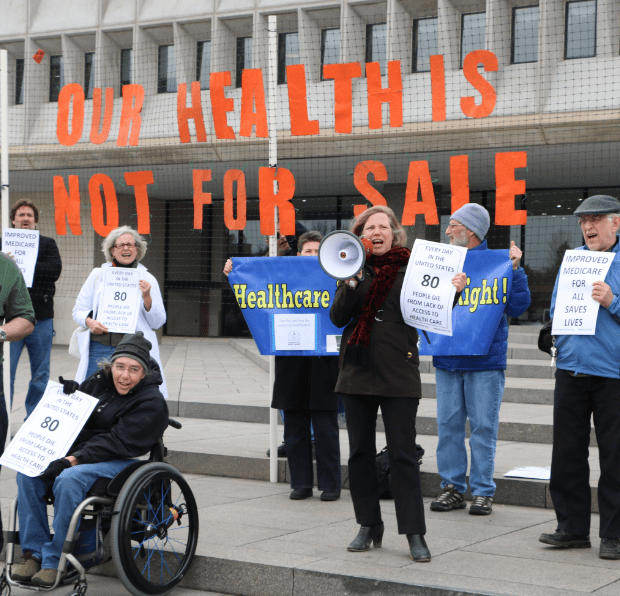 By Margaret Flowers for Health Over Profit.

On April 7, people around the world took action to celebrate World Health Day by declaring that health care is not a commodity and should not be privatized. The theme of the day was “Our health is not for sale.  In the more than 80 cities in the European Union that participated, the demands were to provide full public funding for their health systems and to end privatization. In the United States, the demand was to create a universal publicly-funded health system, as every other industrialized nation has done.

In Washington, DC, health advocates gathered in front of the Department of Health and Human Services, which is close to Capitol Hill, with a large banner that said, “Our health is not for sale” to speak out about the failures of the United States’ market experiment in health care.

Dr. Carol Paris, the president of Physicians for a National Health Program, described the epidemic that is sweeping the nation, which curiously stops at the Northern and Southern borders. She calls it Privatization-Induced Stress Disorder or PISD (pronounced “pissed”). Dr Paris said we are all pissed no matter whether you are a patient or a health professional and rich and poor alike, except perhaps those in the top 1% of wealth.

Brittany Shannahan, organizer for the Health Care is a Human Right campaign in Maryland and who lived in the United Kingdom for eight years, made the connection between our global struggles for health care. “Doctors and nurses in the UK have been on strike over the past year for the same reasons that health professionals in the US are fighting for a better system. They are being forced to spend less time with patients and care for more than they can handle in order to save money,” she said. “We are in solidarity with their struggle.”

Kevin Zeese, co-director of Popular Resistance, said that the fundamental struggle in the United States is whether we will treat health care as a commodity through a system like the Affordable Care Act, which relies on private insurance, or whether we will treat health care as the public necessity that it is and create a publicly-funded universal comprehensive health system, National Improved Medicare for All. “You can’t say that health care is a human right and then treat it like a commodity,” said Zeese. “We need members of Congress to be held accountable for where they stand on this issue.”

After the speak out, the group held a die-in on the front steps of the Department of Health and Human Services to bring attention to the 80 people who die every day in the United States because they do not have access to health care.

Teach-ins, rallies and marches were held in other cities across the United States. The North American branch of the People’s Health Movement, which called for the day of action, held a teach-in and rally in Seattle. Activists gathered in a park in Minnesota and in the down town of York, PA. Others marched in New York City.

In the European Union, there were a wide variety of actions. In Brussels, a group taped a large bar code to the front of the national Ministry of Health to show that health care is not a commodity that can be sold in the marketplace. They also rallied and displayed white banners throughout the city.

Some actions were simple. White banners were displayed in cities across the EU saying “Our health is not for sale.” People also tabled in public spaces.

Others held choreographed actions such as flash mobs, puppets, skits and even a tug-of-war.

Health advocates held a crime scene investigation to say that not funding public health is a social crime.

In Mataro, Spain, they had a large public meal of vegetarian paella.

There were teach-ins and rallies.

And in Italy, they marched.

Around the world, the demand was clear. Everybody needs health care!