PHM Canada signed on to a joint statement (seen below) from NGOs and allied groups calling for the Prime Minister of Canada, Justin Trudeau, as well as the Premier of Quebec, François Legault, to address environmental racism occurring on the Mohawk lands of Kanehsata:ke. To view the current demands and to sign the petition, please click here. 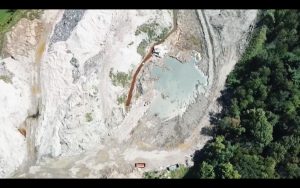 As you may have been informed by your respective ministries, the G&R Recycling facility in Kanehsatà:ke, Québec, has been reported to contain toxic waste without permits or precautions1 to prevent spillage into the environment. Health experts cited in local media and the Toronto Star2 identify this waste as a threat to human health. The longer this waste sits unmanaged and untreated on Indigenous land, the greater the threat to all adjacent communities and waterways connecting with the St. Laurent seaway.

Evidence from documents obtained through Freedom of Information Requests establish that Environment and Climate Change Canada and the Québec Ministère de l’Environnement et de la Lutte contre les changements climatiques have been aware of the presence of toxic waste on the site since 2019. In spite of this, neither the federal nor the provincial government has taken decisive action to secure the site. Instead, they have consistently redirected responsibility to one another, leading to a persisting danger for local residents with no clear roadmap for cleanup.

G&R is no isolated incident. In 2019, the United Nations rapporteur for human rights and hazardous substances stressed that Indigenous Peoples are “disproportionately affected” by toxic waste. At Grassy Narrows, much of the population suffered from Mercury Poisoning. At Fort McMurray, First Nations communities continue to bear the brunt of the energy sector’s activities.

At a time when Reconciliation with Indigenous Peoples is a national dialogue, actions must follow words to alleviate the historic and systemic mistreatment of Indigenous communities. We the undersigned in this network are calling on you today to mobilize the vast resources of the federal and provincial governments to immediately secure and decontaminate this dump site in Kanehsatà:ke and others like it.

We also ask the federal government to re-introduce Bill C-230, as reported by committee in the last Parliament, and seek the agreement of other parties to proceed to third reading before the end of the year.  If passed, this bill would reveal the discriminatory effects of environmental policy-making and, we hope, avoid further instances of unregulated and dangerous waste sites on Indigenous lands and adjacent to the homes of the country’s racialized populations.

Concretely, as an immediate display of good faith and commitment to Reconciliation, we demand that the federal government coordinate with the Province of Québec and Band Council to develop a plan to clean up the G&R facility with a publicly-available timeline and milestones.