Women’s human rights include the rights to equality, to dignity, autonomy, information and bodily integrity, and respect for private life and the highest attainable standard of health, including sexual and reproductive health, without discrimination; as well as the right to freedom from torture and cruel, inhuman and degrading treatment. –UN Human Rights Council

Sexual and reproductive rights have suffered an onslaught of attacks and are threatened around the world, including in the United States. In the U.S., we see access to sexual and reproductive health services shrinking, and too many people, especially poor women, women of color and transgender people, are left without the full range of health care, a basic human right.

People’s Health Movement-USA condemns all efforts by states or the federal government to restrict access to abortion or any sexual and reproductive health services. This is an attack on people’s autonomy over their bodies. It is discriminatory and is a violation of the universal right to health.

The Trump administration has worked to systematically dismantle funding to doctors and organizations that provide information, referrals, or services about the full scope of sexual and reproductive care, including access to abortions. It has reinstated and expanded the so-called “global gag rule” and, in the U.S., has imposed a “domestic gag rule” on Title X funding, which has been effectively regulated since 1970 without such a rule. These gag rules bar any organization that provides, makes referalls for, or otherwise include abortion in its family planning services from receiving federal funding. Anti-choice organizations have long advocated for these gag rules at the cost of millions of people’s right to reproductive health and freedom.

With these actions, the Trump administration has put at risk millions of people, especially low-income communities, who seek birth control, cancer screenings and other essential health services from providers, such as Planned Parenthood, that receive Title X funding. Due to the rule going into effect many of these providers, including eight states, have been forced to withdraw from the Title X program, rather than provide misleading and incomplete information to patients who seek to make informed decisions about their healthcare. 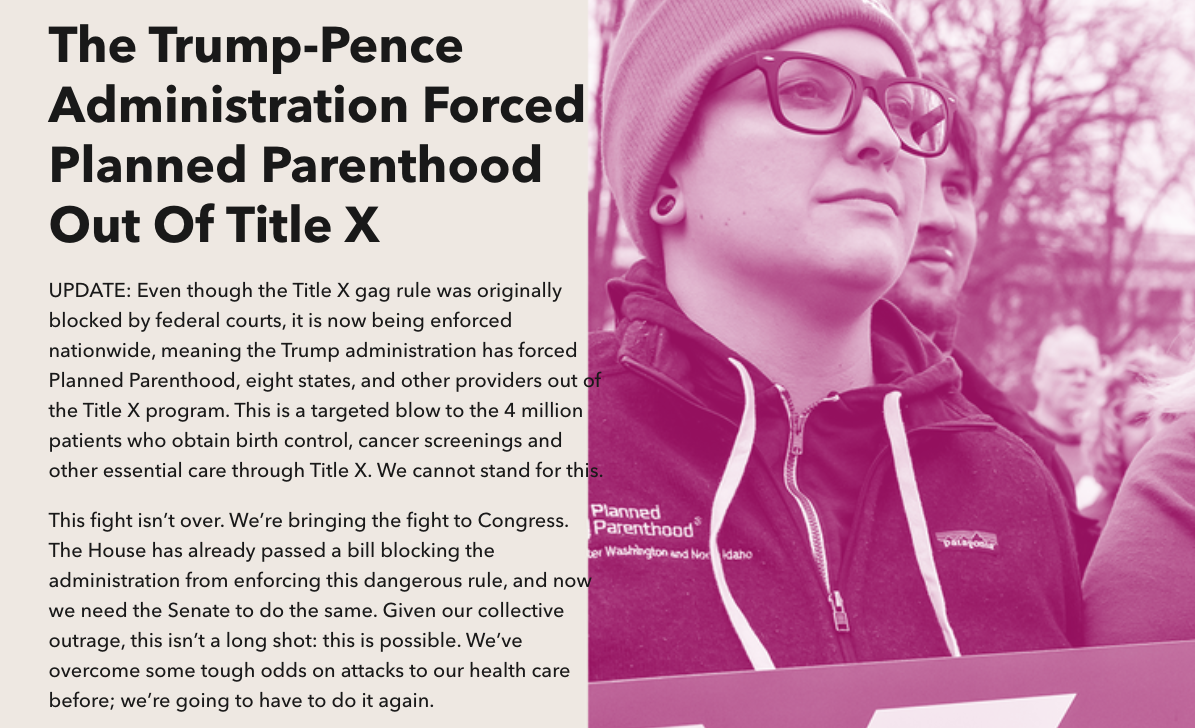 The result of restricting access to contraceptive services invariably leads to an increased demand for abortions for unplanned pregnancies. However, states including Ohio, Missouri, Kentucky, Louisana, Mississipi, Georgia, Utah, and Arkansas have banned abortions during the very early weeks of pregnancy. Alabama has outlawed abortion in almost all circumstances, completely eliminating the right to choose and violating long-settled constitutional law. This is a gross violation of human rights and is wholly unacceptable.

As conservative lawmakers and politicians destroy these essential health services, they work simultaneously to further dismantle the Affordable Care Act and push for cuts in funding for Medicaid. These programs work to ensure that individuals and families have access to healthcare whenever they seek care, not only during or in the months following a pregnancy. Instead of crafting policies that would promote people’s health and well-being, these lawmakers advocate policies–such as regressive tax reforms or inhumane immigration policy–which perpetuate the gross social, economic, racial, gender, and many more inequities we see across the US:

Black women and Native American/Alaska Native women are dying: These groups of women are 3.3 and 2.5 times as likely, respectively, as white women to suffer a death related to pregnancy.

Transgender people are much more likely to live in poverty and are less likely to have health insurance than the general population.They often postpone or go without care when they are sick because they cannot afford it and because of discrimination from many providers.

Moreover, the impacts of such policies reverberate across the globe. The United States provides critical funding to countries around the world which help women access essential health services, but the global gag rule threatens these funds, restricting the range of services that may be provided. Up to 26 million women worldwide are denied health services, including contraception services, under this discriminatory policy, and recent gains in maternal mortality and child health may be rolled back or erased entirely.

Reproductive justice is ensuring that everyone, especially exploited and oppressed people, have the economic, social, and political power and resources to make healthy decisions about our bodies, labour, sexuality and reproduction for ourselves, our families, and our communities in all areas of their lives. –PHM-NA Reproductive Justice Caucus

PHM-USA denounces regressive racist and sexist policies that restrict access to sexual and reproductive health services, further threaten reproductive justice, perpetuate social and economic inequalities and violate people’s right to health. We stand in solidarity with LGBTQ people, women, children, and families everywhere who unjustly shoulder the burden of the outcomes of these policies.

We call on everyone to join PHM-USA and people in this struggle around the world to:

work to build and expand links between individuals and groups working on reproductive health, reproductive rights, and reproductive justice on the ground in the US and globally;

I Stand With Planned Parenthood

PHM Statement on Access to Safe, Quality and Legal Abortion